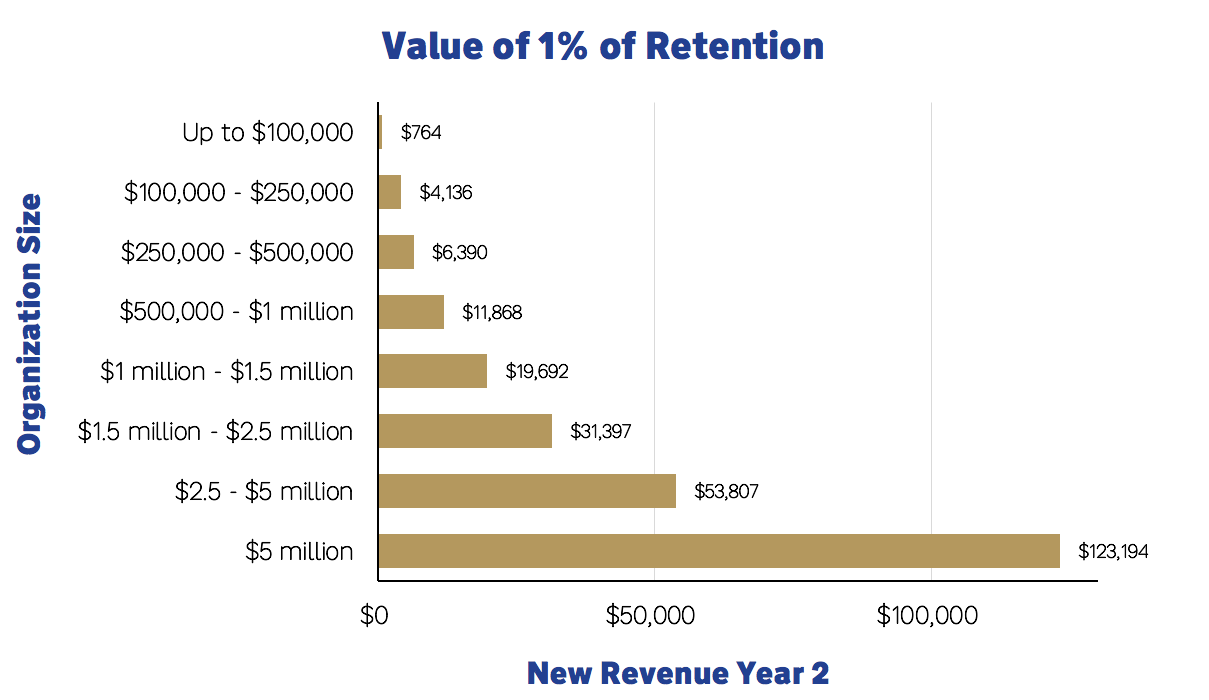 An Easier Way to Raise Money

You can raise significantly more money each year by just keeping your current donors happy and fulfilled. A 1% increase in retention rates can mean as much as $123,000 in new revenue next year.

Donor retention isn’t hard.  Clearly it’s worthwhile.  So why are we, as fundraising professionals, on a giant hamster wheel of inefficiency—replacing nearly half of our donors every year?

Donor attrition can be catastrophic.

Consider a nonprofit with 10,000 donors. With a 60% retention rate, its donor base falls to 6,000 in year two. After five years, the organization has only 780 donors left.

We don’t know exactly why donor retention rates are so low.  Maybe it’s because we’re obsessed with the new and the shiny.  Or maybe our boards push us to recruit new donors because they think that means more awareness for our cause. It’s time that we, as fundraising professionals, prioritize retention rates and revenue—and educate our boards.

The Fundraising Effectiveness Project estimates that if an organization (one that raises at least $5 million per year) raises its donor retention rate by just 1%, they will add $123,194 to their bottom line the following year.  If they raise their retention rate by 10%, that’s $1,231,940 in new revenue the next year.  And if retention rates rise year after year, these results are compounded for even greater growth.

The average major donor doesn’t become a major donor until after they’ve given five gifts. At current retention rates, half of your major gift prospects walk out the door each year.  These are donors who have already expressed an interest in your mission.  You’ve already accomplished the difficult task of donor identification and acquisition; keeping them should be equally as important.

If your organization is considering a capital campaign in the coming years, you’ll need a strong and committed donor pool—one that has been carefully cultivated and engaged. A revolving door of donors fails to create that base of supporters you need for visionary projects that will transform your organization or institution.

How to Retain Your Donors:

We know that with more revenue, you can do more to help advance your mission.  To thank you and give back, we are offering a free 15-minute donor retention analysis.  You’ll learn how to improve your rates and raise more funds.

Let the Winkler Group discuss your donor retention rates and give you suggestions to boost them.  Schedule a 15-minute call that will get you on the road to retention ROI.